There’s many reasons this pope is bringing shame to our church; I will not mention them as it’s not my place. This is my personal testimony and Witness of Faith of something that happened to me locally in Tallahassee… and how the Vatican helped hide our story.

James Flaherty is a Luciferian living as a priest. Luciferians believe their mission it to cause as much pain and suffering to innocence. Adrenochrome is what is released by children who are in sheer terror and pain and these pervs feed on it. At a higher level luciferians are simply negative beings that slowly chip away at the humanity of a person until they commit atrocious homosexual acts and then they own a spiritual hold on you. This type of parasite man is evil… and infesting our church.

Fear not! There’s Christian warriors and defenders of Faith constantly fighting this just, good fight. We provide hope to the hopeless. When God is with you, who can be against you?!

Continue reading past the photos if you want to know about my personal encounter with this demon.

We are Polish Patriots

Standing guard with the image of “Our Pride of Poland” 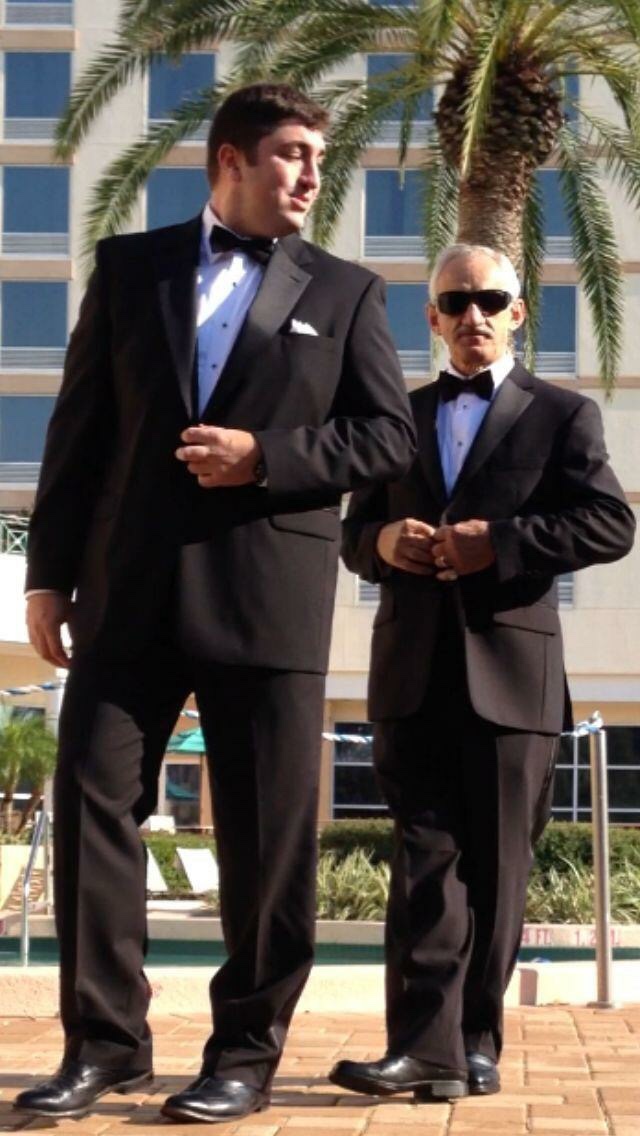 My dad and I were knighted Sir Knights in Florida together with the first class of KofC Knights in Poland 2009.

Lech Wałęsa is credited of ending communist occupation of Poland. My father defected communist occupied Poland in 1976 to come to USA and serve the US Army.

My dad is a very serious person, and I enjoy educating people through humor and memes.

Those who know who this man is in the painting would know who I’m sitting with in Houston when my dad brought him from Poland. That story is for another time. 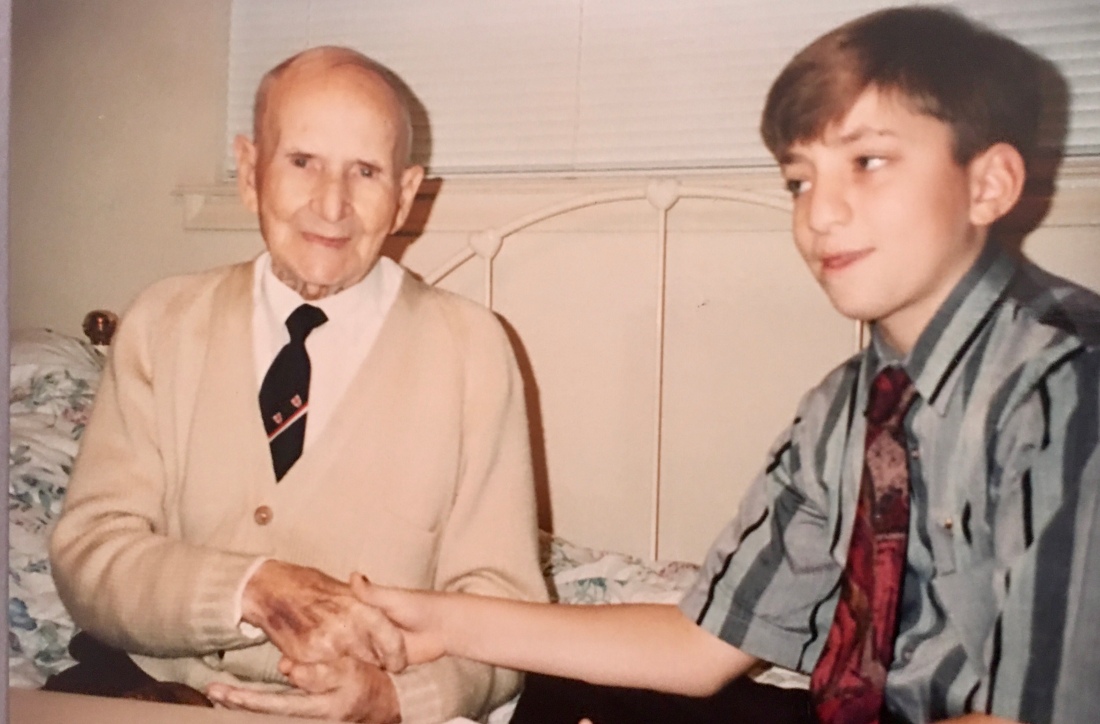 My encounter with Father James Flaherty the Luciferian

When I told the last bishop in Tallahassee about this perv’s harassment to me in 2011-2014, he suggested I leave the diocese to start fresh somewhere else. The abuser systematically harmed me and my family’s relationship with the church because I wouldn’t entertain him. He used my annulment as leverage over me suggesting his notes would affect my future possibility to become a deacon; he slandered my character in church records. He even orchestrated others in his dark circle to file complaints against me to the Knights; they believed them and asked me to stand down.

Who was he? What role did he serve? He was the director of the tribunal, the administrator of the diocese, and the spiritual director of the seminary. Three times I went to the priest recruiting retreat, and three time about 4/5 guys joined the priesthood. Guess who didn’t?Me! I’m pro-family and as soon as a priest can marry, I’ll be the first in line. Until then, I’m happy in my role as a Knight- a defender of Faith.

I advocate liberty and family!

Nov 2018… I’m back in Tallahassee; there’s a new bishop and a new attorney general. He has been outed, and the Knights are welcoming me back.

I’ve spent the past few years rebuilding my character and am able to finally share the story of my persecution. The predator has been outed… and hopefully will remain out of the church, but I know others who have not come forward. These men have been baker acted, silenced, or paid to hush. Wounds from his infestation in our church are still fresh!

However, I feel safe to be in my home diocese again…. oh, and my home Parrish got rid of the house perv too. He was a big sissy and people knew he was “ya know” from a mile away. I’m happy to start the recovery and healing process soon. Being Fully Alive is the diocese motto… and I’m Benito Fully Alive, Free Man Walking!

The last bishop told us to give our witness of Faith… so here is mine. Please be sure to send this blog to Bishop Parkes (he knew). Here is his photo standing over my dad under the cathedral of oaks on the martyrs’ land near our retreat house in Tallahassee. This special Mass was featured in this article.

Note who EWTN credits the Mass to 😉 http://www.ewtnnews.com/catholic-news/US.php?id=6351 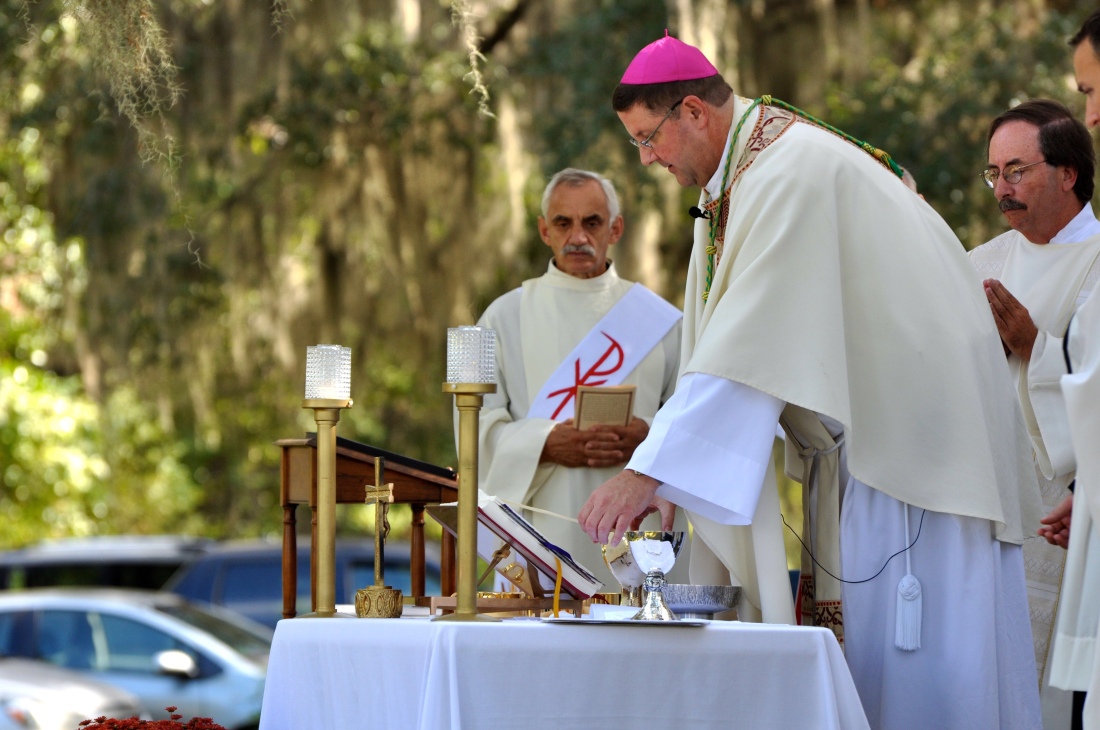 Here’s video of the bishop blessing the statue as business as usually. I am on the other side of the Pope standing guard as business as usual. Both of us are carrying on as nothing ever happened and as if I never reported to him in confession about whats-his-face-fudge-packer. We are at St John Paul II High School in Tallahassee.

The Roman Catholic Diocese of Pensacola-Tallahassee said Monday that it has removed a well-known Pensacola priest from his office.

Sharmane Adams, spokeswoman for the diocese, said Bishop William Albert Wack had asked Monsignor James Flaherty to “step away from his duties” as the diocese’s judicial vicar, director of office of the tribunal, director of the lay formation institute and director of priestly formation.

Adams said Flaherty was removed within two days after a fellow priest and two parishioners approached the bishop with “non-specific concerns.”

“The issues were not mandatory to report because they were not involving sexual abuse of a minor,” she said.

While the bishop acted to remove Flaherty from his current post within two days of receiving multiple complaints, according to Adams, parishioners said Flaherty had been removed from St. Paul’s earlier this year.

In May of 2017, the diocese announced Flaherty had been transferred from serving as pastor of St. John the Evangelist Parish in Pensacola to St. Paul as parish administrator.

Flaherty earlier had served at Holy Spirit Parish on Gulf Beach Highway, but was reassigned in 2012.

Adams said Flaherty would no longer be assigned to any parish but would be allowed to say Mass in his home. “There is no intention to remove him from being a priest,” she said. Flaherty did not return phone messages left at several numbers associated with him.

A letter written by the former Vatican ambassador to the U.S. is raising questions about whether the pope knew about sexual misconduct allegations against the former archbishop of Washington, Theodore McCarrick, but rehabilitated him anyway. (Aug. 27) AP

‘Skeletons in their closet too’

Flaherty said European members of the church had pointed to the scandal as an American problem.

“They have skeletons in their closet too,” he said. “If you look at some of the statistics, there are higher numbers of abuse in other churches and society as a whole than in the Catholic Church,” he said.

On the heels of another removal.

Flaherty’s removal comes two weeks after the Diocese of Pensacola-Tallahassee removed a priest of two Big Bend churches after he was accused of inappropriate contact with an underage girl in 2004 when he was serving at Blessed Sacrament Parish in Tallahassee.

Hello… I’m the real deal. My name is Sir Knight Benjamin Alexander Thaddeus John Horbowy and I’ve been sent back to Tallahassee to help this parrish and community heal spiritually. It’s none of the priests’ or the bishop’s business or authority to limit or help me; however I respect them as I am noble and I’m at their service too. Even though I favor the current Polish pastor of Blessed Sacrament and the associate priest whom I was at his ordination, my loyalty remains to the wellness of the church.

By the way, my family has successfully helped expose /lock up priests and bishops from the church in: Virginia, Kentucky, Texas, and Florida. It’s time we call for reform and revisit the notion that some priests shouldn’t be limited from family ministry by a forced, unnatural vow of celibacy.

Jesus, I trust in you… all others remain suspect.

May this white smoke bring us a new Pope.